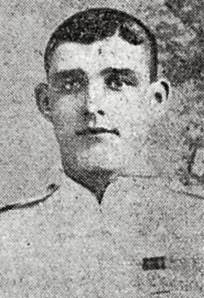 Position in family: The eldest son

Marriage: Thomas was married to Minnie (daughter of Joseph and Martha Ann Youel) on 27 October 1910 in Barnsley (9c 452)

Military Service:
Previous Service: South African War 1899-1902 with the 1st King's Shropshire Light Infantry (Awarded Queen's South Africa Medal)
Enlisted: 4 Aug 1914 at the age of ? years
Regiment and Battalion:  King's Shropshire Light Infantry 1st Battalion
Service number and rank:  6532  Corporal
Awards: DCM - for conspicuous gallantry and initiative on 9th August, 1915, at Hooge, when he reconnoitred portions of the position when first reached, and rendered great assistance to his Officers in organising the section of the line taken.  He displayed great bravery and coolness, and set a fine example to the men with him of devotion to duty. (London Gazette 15 September 1915)
Personal information:   *unknown*

Notes:
Minnie remarried in 1916 to William H Wilson and went on to have five further daughters.

Our portrait gallery this week contains the photograph of Corporal T Knight, of the Shropshire Light Infantry, whose home was at Day's Croft, Monk Bretton, and who has laid down his life for King and country. As announced in these columns some weeks ago Corporal Knight was in August last awarded the DCM for conspicuous bravery at Hooge (Belgium).  On the same occasion he was congratulated by Major General Congreve, VC, and was promoted to the rank of Corporal on the field.  It appears that at a critical moment Pte Knight (as he then was) led his company in a charge, the officer having been killed.  He said, 'Come along lads, I'll lead you to death or glory', and the boys responded, 'Yes we will'.  'Over the parapet we went' said Corporal Knight in a letter to his wife, 'and we sprang on the Germans like lions on their prey.'  He accounted for three German officers.  After the charge Knight further distinguished himself by taking a message to this colonel a distance of two miles under heavy fire. On delivering the message he dropped through sheer exhaustion from want of food and drink.  He sustained a shrapnel wound on the head and the doctor wanted him to go to hospital.  'But' said Knight 'I declined to leave my regiment'.  And not long afterwards the hero mad the greatest sacrifice of all.


The news of his death was received with very deep regret in Monk Bretton, and much sympathy is extended to his widow and three children.  Monk Bretton people looked forward to seeing him home on an early furlough, when there is no doubt they would have given the hero of Day's Croft a right royal welcome.  Corporal Knight went through the Boer War and did good service there.  He worked prior to going to fight the Huns as a miner at Monk Bretton Colliery, where he had been about five years and he was held in high esteem by the management and workmates alike.  He was a highly esteemed and useful member of the Monk Bretton orchestra of which Mr J W Shaw is the able conductor.


The widow of the deceased has received a letter in the following terms from Pte J T Johnson of the KOYLI, with the British Expeditionary Force in France: 'You will be surprised to hear from me but I thought I would just drop you a line hoping it will cheer you up a bit in your great trouble.  I am sorry from the bottom of my heart at the bad news.  I was so proud to think we had such a hero in Day's Croft, and then comes the news of his death; but I hope you will have the strength to bear up in this sad time.  You have the consolation of knowing that your husband died a hero, bravely fighting for his King and country.  I wonder what the young slackers of Monk Bretton think of themselves when they read of such heroes as Corporal Tom Knight DCM - nothing but shame I should think.  I hope to hear of the people of Monk Bretton seeing to it that you are adequately provided for, and that you will be able to bring up your little children in respectability, as befits the children of a hero.  That is the very least they can do in memory of your heroic husband. The battle in which he met his death was awful, though it turned out a big victory for us. I wish he had been able to rejoice with us, but the Lord called him to be one of his heroes in a greater battle than this,  With deepest sympathy'.
Posted by BarnsleyHistorian at 07:33