Fred's father's surname is spelt Procter (with an e) in 1891 and 1901 census returns and on his marriage to Betty in 1882.  The name seems to have changed to Proctor (with an o) on the family's arrival in Barnsley after James' death. 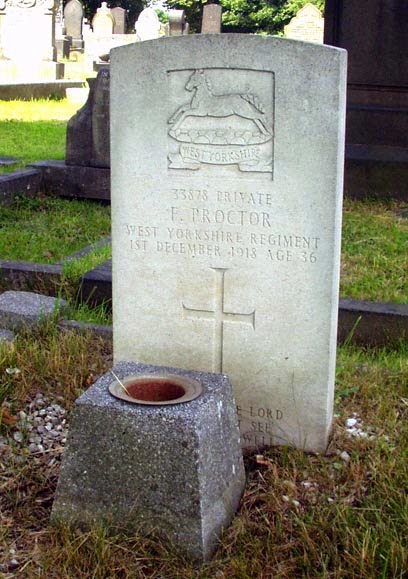 Fred is buried in Ardsley Cemetery in the same grave plot as his wife Elsie who died in September 1967 aged 78.  His Commonwealth War Grave Commission headstone sits surrounded by the kerb edging of his wife's grave.

The inscription at the foot of the stone reads,

This will have been especially requested and paid for by Elsie at a cost of 3 and a half old pence a letter, a total of 15/2 (fifteen shillings and two pence).


According to his Army Service Records (available on Ancestry) Elsie was awarded a pension of 25/5 (twenty five shillings and five old pence per week) increasing to 44/2 from 3 September 1919 for herself and two children.

A previous application for the payment due to her as a soldier's wife had been supported by the local Ardsley Branch of the Soldiers & Sailors Families Association.


This letter gives us invaluable personal information including the date and place of Fred and Elsie's marriage and the birth date of their daughter Ruth.

Note how payment at Stairfoot Post Office is requested.  This is about a mile from Vaal Street.


Fred's family story has been written by his grandaughter's husband Edward Holling who also gave us the photos in this story.
(slightly edited for space and accuracy)

"Fred was a joiner and worked for Squire Micklethwaite on the Ardsley House and its estate houses.  He met Elsie Gosling who was a maid servant at the house.
They married in 1914 and the Squire rented them of his houses in Vaal Street, Measbro’ Dyke.  Their first daughter Ruth was born in 1915.

In 1915-16 Fred was conscripted into the army as 33878 Pte F. Proctor, West Yorkshire Regiment.  He  caught tuberculosis and was hospitalised from which he caught pneumonia and died on 1st December 1918 three weeks after the armistice signing.

He was buried at Ardsley Cemetery, Hunningley Lane, Stairfoot with a War Graves Commission headstone.

At this time Elsie was pregnant  and gave birth to a second daughter Freda on 15th December 1918.

In 1920 Squire Micklethwaite offered Granna Elsie a house and shop at 1 and 2 Elm Row, Hoyle Mill which she ran as a General Dealer.

In 1935 her eldest daughter took over the shop, as she had trained as a hairdresser the interior was panelled and local scenes were painted on them by her nephew Reg Gosling, local artist and School Attendance Officer.  Ruth Proctor was noted for her Wella perms and Marcel waves.

In 1937 she married Harry Davies, a barber from Racecommon Road who also played rhythm guitar with the Mayfair Dance Band.  My late wife Betty was born in 1938 and named after the film star Bette Davies.  Ruth retired from ill health in 1965, Freda her sister opened a shop in Cudworth as a hairdresser.

There are four or five headstones in Ardsley Cemetery and the local British Legion up to six years ago put poppies on the stones.  The Branch closed and I still every November put a poppy cross on the grave."

The brother of Elsie Proctor, Ben Gosling b.1878 served in WW1 in the Royal Scots Fusiliers and was killed on 19 November 1917.  He is buried in France.

A very interesting account, thank you. When we lived at Burton Grange we used to pass through Hoyle Mill to and from town.

There was a lady hairdresser, called Ruth Proctor, she was the first one in Barnsley to give "cold perms" She had the reputation of of being the best hairdresser in the area. If anyone admired my mum's hair, she would say with satisfaction, "well it is a Ruth Proctor, you know". I know that this has nothing to do with soldiers, it was the name which brought back this memory.

That is a brilliant memory of Ruth Proctor, who is mentioned in the post above. As she was the daughter of Fred your story is absolutely in the right place.

I have been reading Fred Proctor's story again, I love to remember old times, it has just come to mind that my mum was in a "perm club" this meant that women could afford to go to Ruth Proctor. I think mum paid about 6d a week (2 and a half pence in today's money), the members of the club used to draw lots for their turn in the queue. I see that Harry Davies is mentioned, Harry was a Barber and his shop was 60 Racecommon Road Barnsley. My dad used to go there for his hair cutting, by strange coincidence, when Harry retired my hairdresser bought the shop and I have been going there for years. It is more modern now, but I always think of my dad when I go through the shop door. Another twist, Harry Davies had a sister called Phyllis, she married my uncle Frank (Wood) thus becoming my aunt by marriage.